We recently broke the news that fellow American artist Flore is also accepting cryptocurrency for his work. Who is Daniel Allen Cohen?

According to his website, Daniel Allen Cohen (“This Is Addictive”) is an emerging artist based in the Los Angeles area. He describes his work as a  “tongue-in-cheek commentary on American youth.” His work includes painting, acrylic, metalwork, work, and graphic design that showcases his “fiction or factual-based narratives.”

What’s the Story Behind “This is Addictive”?

This is Addictive is the brand Daniel has built around his work. It showcases things in society that can seem addictive. Some of his popular works include the “Born Rich Bar”, “Gold Rush”, “Mr. Goldbar”, and “Wealth Bar” among others. These pieces run upwards to $20,000 and have already sold out on his website. Another piece on site that displays his “tongue-in-cheek” persona is his “Indulgences” piece. This piece showcases a pack of pills labeled “Indulgences” with the packaging reading “Maximum Strength Sin Reliever” and compares it to “the Indulgences of the Catholic Church”. Recently on his Instagram, Daniel showcased a new piece called “Time is Money” featuring a variety of currencies, including Bitcoin, in a functioning clock. With the recent rise in Bitcoin prices, it comes as no surprise that Daniel is featuring Bitcoin and cryptocurrency as part of his “addictive” collection. Emerging artists should take notice of what Daniel and Flore are doing when it comes to accepting Bitcoin as a payment method. By stepping outside the box, they are opening up their work to the ever-growing cryptocurrency demographic.

Not only are they allowing Bitcoin as a payment method, they are also using it as a marketing strategy to promote their work. How many people will actually purchase their work with cryptocurrency? Probably not many. But how many people will become aware of such artists because they accept Bitcoin? Probably quite a few. Cryptocurrency enthusiasts are attracted to other cryptocurrency enthusiasts and crypto-friendly businesses like This is Addictive.

It wouldn’t be surprising if other artisans and businesses start using cryptocurrency as a marketing strategy and targeting their work towards cryptocurrency enthusiasts. 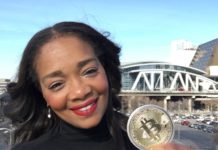